Return of the Thin White Duke

I was pleased to find David Bowie's Station To Station in excellent condition for £1 at a recent boot sale: 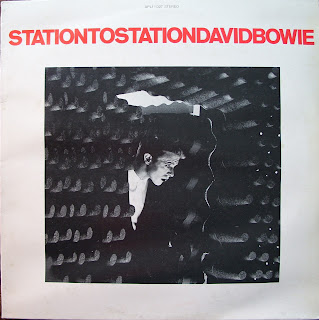 Bowie's tenth studio album was partly influenced by his recent role in the Nicolas Roeg film The Man Who Fell To Earth, a still from which is used as the cover art.

A transitional album, Station To Station develops the "plastic soul" and funk grooves of Young Americans towards his later "Berlin Trilogy" which were influenced by cold German electronica and motorik rhythms (Neu!, Kraftwerk).  His alter ego here is the "Thin White Duke" who comes over as a drug addled aristocrat; an emotionless alien character whose impeccable style and poise were only eclipsed by his massive cocaine intake.

It's hard to pick out favourite songs from the six on the album, but my two favourite at the moment anyway, are Stay for it's brilliant intro and his cover of Wild Is The Wind, which is just gorgeous.

Station To Station reached no.5 in the UK and no.3 in the US Billboard Pop Album chart.
﻿
﻿
Posted by minibreakfast at Wednesday, November 16, 2011