I bought this for £1 a few weeks ago, partly because I remembered one of their singles, but mainly because of the fantastic cartoon cover art: 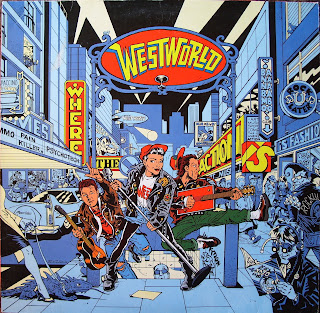 Westworld consisted of American vocalist Elizabeth Westwood, drummer Nick Burton and former Generation X guitarist Bob Andrews.  This was their debut album and I'd describe it as rockabilly-pop with hip-hop beats.  No, come back...

The two most successful singles were Sonic Boom Boy which reached no.11 in the UK and Ba-Na-Na-Bam-Boo which got to no.37.  They are both pretty good songs, and I also quite like another called Psychotech, but that's about where it ends really.  Most of the rest is weak to awful, with thin 80s production and forgettable tunes; the nadir being the track Cheap & Nasty, whose apt title sums up the feel of much of the album.

Great cover, a shame the contents aren't as good.  It reached no.49 in the UK chart.

Posted by minibreakfast at Sunday, November 13, 2011