Knocks Me Off My Feet

Songs In The Key Of Life was Stevie Wonder's 13th studio album and the fourth and last of those from his so-called 70s "classic" period which began in 1972 with Talking Book.  A few weeks ago I found a copy for 50p at a boot sale: 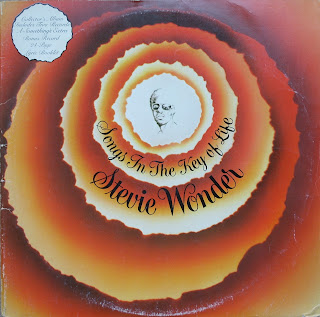 The album boasts 21 songs over a double﻿ LP and a 7-inch four-song EP.  The EP was missing but the huge lyric book was present and everything was in excellent condition.

Wonder does indeed cover a vast array of life's issues including religion, politics, love, birth, death, racism and poverty.  Much has been written about this sprawling critical and commercial gigantic success.  Here's the original Rolling Stone magazine review from 1976:
http://www.rollingstone.com/music/albumreviews/songs-in-the-key-of-life-19761216

It spawned several successful singles and went straight in at no.1 on the US Billboard album chart.  It reached no.2 in the UK and is listed as no.56 in the Rolling Stone 500 Greatest Albums Of All Time.

It's difficult to pick out favourite tracks, as the overall quality is so high, but here are a couple of zingers, followed by the link to the whole album on our good friend Spotify.

Spotify:  Stevie Wonder – Songs In The Key Of Life

Probably the best 50p's worth of tunes I've ever bought.

Posted by minibreakfast at Tuesday, December 06, 2011