This arrived via eBay yesterday just in time for the final run-up to Christmas - a snip at £4.06.  Originally released in 1963 and called "A Christmas Gift For You from Phil Spector", it was reissued with this different title and cover art 20 years later. 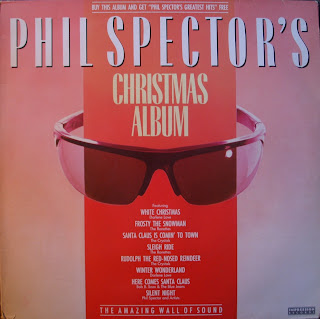 It features four of Phil's artists; The Ronettes, The Crystals, Darlene Love and Bob B. Soxx & The Blue Jeans.  Spector's Wall of Sound is put to phenomenal effect on seasonal classics Frosty The Snowman, White Christmas, Sleigh Ride, I Saw Mommy Kissing Santa Claus and many others.  Some kind soul has put some of the tracks on youtube:


Fantastic!  The album ends with a spoken message from Phil himself over a rendition of Silent Night by all of the artists.  It really is an essential part of Christmas, so here's the Spotify link﻿ to the entire album:  Various – A Christmas Gift For You From Phil Spector

Merry Christmas all xxxx
Posted by minibreakfast at Sunday, December 18, 2011