Sunday's boot sale was a big one, no doubt due to the glorious weather.  There was a fair bit of vinyl to flip through and I came home with four LPs.  The first was America's uninspiringly named third album Hat Trick (50p). 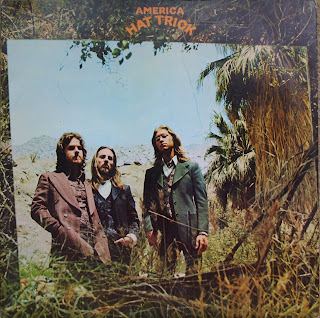 America - Hat Trick (1973)
Uninspired name, yes, but not a bad effort, although not as good as the later album I have of theirs, Hearts.  Hat Trick wasn't a huge seller compared to some of their other releases, perhaps because the songs are more chilled and less rocky.  I like their harmonic, California sound.  Funnily enough all three members were born and grew up in the UK, sons of American airmen stationed here, and British mothers.  They recorded their debut album in London and only moved to California for the recording of their second (Homecoming).  Fave tracks:
Spotify:  America – Wind Wave            America – Rainbow Song

Next I got Creedence Clearwater Revival's Hits Album (1981) for £2.  It's one of a staggering 14 compilations released over the years, compared with just seven actual studio albums.  I guess they're radio favourites the world over, so their greatest hits comps sell very well. 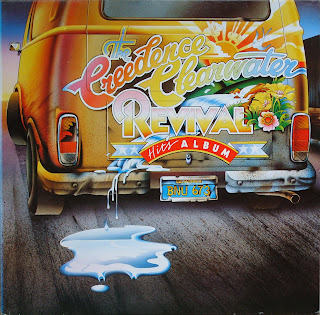 Creedence Clearwater Revival - Hits Album (1981)
These guys are actually from California as the cover would suggest, although their sound is more Southern bluesy country-rock.  With 20 tracks crammed onto one disc I was spoilt for choice but here are a couple of faves:

I'll post the other two albums later this week.
Posted by minibreakfast at Wednesday, August 03, 2011