I rolled up early at my local fortnightly car boot sale yesterday only to be greeted by a sign reading "cancelled - too wet" and an empty field bathed in glorious sunshine.  Either the organiser hadn't seen the forecast for a dry morning or was referring to the state of the ground, which may well have been pretty soggy from Saturday's downpour.  Anyway, we set off up the coast to another boot sale and I got this first for just 50p: 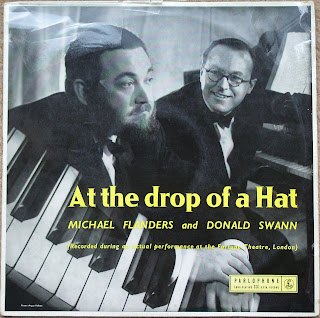 Flanders & Swann - At The Drop Of A Hat (1957)
Michael Flanders and Donald Swann wrote and performed brilliantly comic songs in the 50s and 60s.  The comedy duo Armstrong & Miller do a loving pastiche of them in their TV sketch show (see youtube) with the same level of charm and wit but much ruder!
This live performance was recorded in 1957 at the Fortune Theatre, London to an enthusiastic audience.  Songs include 'A Gnu', 'The Reluctant Cannibal' and my favourite, 'Design For Living' which is laugh-out-loud and still holds true today.
Spotify link:  Flanders & Swann – Design For Living
Next I got History - America's Greatest Hits for £1: 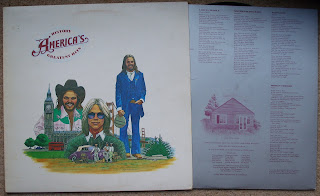 I got two more albums yesterday; I'll post them later in the week when I've had a chance to listen to them.
Posted by minibreakfast at Monday, July 18, 2011

Email ThisBlogThis!Share to TwitterShare to FacebookShare to Pinterest
Labels: america, flanders and swann