I love looking for old records for many reasons.  Primarily it's a cheap and interesting way of discovering new (old) music.  It's not free like streaming or torrents, but I find when faced with the vastness of Spotify I often don't know what to listen to, or where to start when I'm in the mood for something new.  The randomness of car boot sales and the like gives me a place to start; many a voyage of discovery has begun with a dusty old LP that seems vaguely interesting and with an outlay of usually 50p or £1 it's a virtually risk-free exercise.  If it turns out to be not my cup of tea it can be taken to the local charity shop - sometimes the very one it came from!

Another benefit of crate-digging is that you never know what you are going to find.  Much Mantovani, Englebert and Jim Reeves has to be sifted through of course, but there's always the promise of something worth hearing, indeed on the rarest of occasions something worth a bit more.

A couple of weeks ago I was at a car boot sale, flipping through a box of 80's hair metal when I spied a copy of Guns 'n' Roses' Live like A Suicide EP labelled £3.


Between the ages of about 15 and 17 I was absolutely obsessed with G'n'R and played pretty much no-one else.  The four tracks on this EP later appeared on the Lies album.  They were recorded in a studio but effects were added to make them sound as if they were recorded at a massive gig.  Of the original EP only 25,000 are said to have been pressed and only 10,000 sold, so are quite collectible and oft-copied. 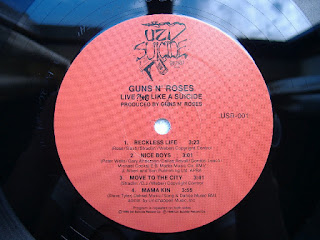 As a G'n'R fan I was thrilled to have found a copy but as a very skint woman, after a little research to verify it wasn't a fake, I came to the decision that I should try to sell it on.  It wasn't in mint condition but certainly came under the "excellent" category which is rare for
a car boot sale. 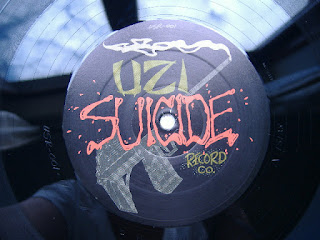 Anyway, I'm pleased to say that it sold on an online auction this week for £69.  Not a bad margin on an initial outlay of £3!  I was sad to see it go but very pleased to make some cash for a change.  I've only ever sold two other records from my secondhand finds - both were for less than a tenner and I had zero emotional attachment to either.


The likelihood of ever finding anything of much worth again is tiny, but I certainly enjoyed the buzz of discovering and selling this one.