Today dawned bright and sunny, so I headed up the coast in search of vinyl.  The site was almost full and heaving with bargain hunters: 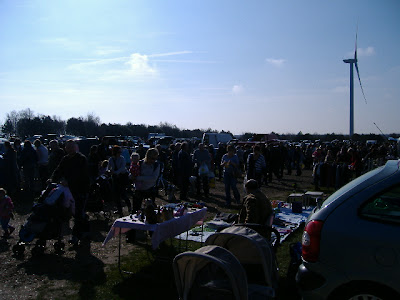 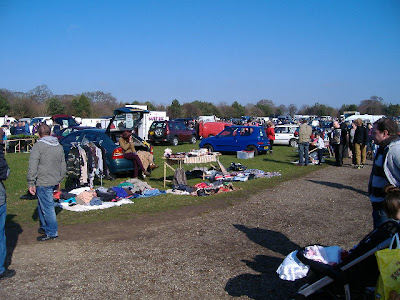 There were quite a lot of records around and for some reason, lots of 80s 12"s.  First I got two Madonna 12" singles at £5 for the pair; more than I would normally like to pay, but they are favourites of mine and in spanking condition:

Two statements of independence from Madonna; Borderline, the fifth single from her self-tiled debut album, remixed by Jellybean (John Benitez) who was then going out with Madge.  This reached no.2 in the UK and no.10 in the US.

Then her second single from third album True Blue; teen pregnancy plea Papa Don't Preach (1986), which reached no.1 in both the UK and US:

For £1 I bought another 80s gem from the wonderfully unique Miss Jones:

It's taken from her 1985 Trevor Horn-produced concept album of the same name, which consisted of eight interpretations of "Slave.."  as well as spoken word sections.  Horn had originally intended the single to be recorded by Frankie Goes To Hollywood but it ended up in Grace's capable hands.  It was a top twenty hit in many countries, particularly German-speaking ones where it achieved it's highest chart positions.

Here's the video of the 7" single version:

Lastly was an EP of remixes of the Rebel MC and Double Trouble's 1990 hit Street Tuff:

As you can see from the track list it contains some of Norman Cook's early work from before he became Fatboy Slim.

For me, the making of the original hit (which reached no.3 in the UK) was it's use of the sample of the bassline to The Maytal's 54-64 That's My Number, but this is entirely absent from all of these consequently disappointing remixes.