I bought this for 50p a couple of weeks ago; the Bad Manners version of the Can Can, which reached no.3 in the UK charts in 1981:

Bad Manners are a 2 Tone ska band from the UK fronted by Buster Bloodvessel.  They still tour to this day but Buster is the only remaining original member.  I bought this, their sixth single to give to my sister Vintage Vicki as a joke present for her 42nd birthday this week.  Last August Bank Holiday she was enthusiastically can-canning to this at her school reunion when she tore her Achilles tendon, something from which she is only now properly recovering.  I couldn't resist buying the single for her when I spotted it at a car boot sale, particularly when the b-side is called Armchair Disco, which was all she was capable of for some months! 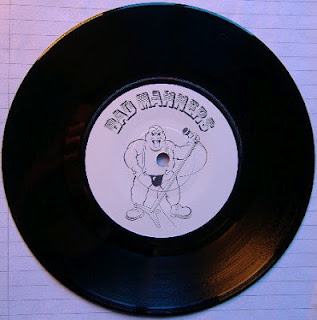