This cost £4 at a recent car boot sale - big money for this vinyl fan, but well worth it! 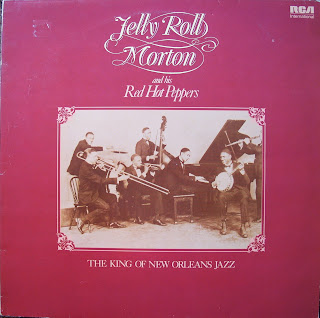 Jazz composer and arranger Jelly Roll Morton's birth name was Ferdinand Joseph LaMothe.  The nickname Jelly Roll (the current black slang for female genitalia) was given to him whilst working as a brothel pianist aged just fourteen.

Born in New Orleans in 1885, he died at just 55 of complications from knife wounds.  During his career he wrote and recorded what are now regarded as jazz classics of the 1920's, including Black Bottom Stomp, Jelly Roll Blues and Wolverine Blues.  His Red Hot Peppers were indeed red hot; musicians such as trombonist Edward 'Kid' Ory and George Mitchell on cornet and trumpet, were both part of the line-up of sidemen.

This collection of recordings (first released in this format in 1962) covers this period during which he was at the peak of his career.  According to the sleevenotes Morton, at the time of his death, was "in the process of suing the world for recognition".  His claim to have "invented" jazz was well known, as was his extremely arrogant nature, and it may even have led him to lie about his date of birth, which may well have been a full five years later than 1885.

﻿
Posted by minibreakfast at Wednesday, November 09, 2011