I got this last Sunday for £1: 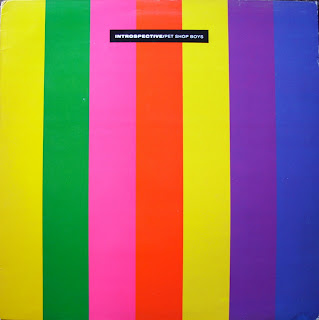 Introspective was the Pet Shop Boys' third album and contains six long 12-inch-style dance tracks, four of which were released as singles in the form of shorter 7" mixes.  These were Domino Dancing, Left To My Own Devices (painstakingly produced by Trevor Horn), Always On My Mind and It's Alright.

It's Alright is a cover of Sterling Void's 1987 house hit.  The album was the Pet Shop Boys' second best selling LP, reaching no.2 in the UK and doing well around the globe including reaching the no.1 spot in Argentina.

A rich mix of orchestral pop, latin rhythms and house, Introspective - despite the name - was created with the dancefloor in mind.

Posted by minibreakfast at Saturday, October 22, 2011