It's Day 5 of the Car Boot Christmas Countdown, which means that we're halfway to Christmas Eve already.  As promised, today we're going Totally Tijuana with a trio of budget label Yuletide parp-fests.

Let's start with this, bought at a car boot sale during the summer of 2015 for a pound.


Released on Hallmark the same year as Herb Alpert's festive offering, Tijuana Christmas by The Border Brass & Singers is a fun collection of twelve familiar tunes in a pseudo-Mariachi style.  The title track that opens Side 1 is not especially Christmassy, but it's very jaunty, with clip-clop percussion, a neighing horse (obviously) and some breathy "pah-pah-pah" female vocals.  In fact the clean cut chorus of guys and girls provide a slew of pah-pah-pahs, da-da-das and even some bum-bum-bums to go with the fa-la-la-la-las; and with all the bells, chimes, maracas, and of course that twin trumpet sound, this record is a kitsch delight.  Deck The Halls features strident harpsichord, as does the rattling arrangement of We Wish You A Merry Christmas. Angels We Have Heard On High incorporates ringing barrelhouse piano, and the clip-clopping reappears for the one-horse open sleigh in Jingle Bells.

The album was released without the overlaid vocals as by just 'The Border Brass' in the US and 'La Nouvelle Génération' in Canada: 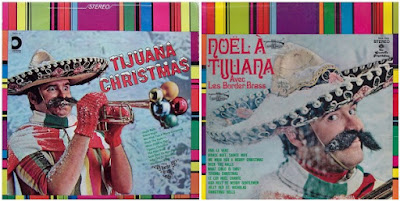 In addition, there are a couple of other versions the same as the UK release i.e. with vocals, but with variations of title, band name and cover art.  These are a US release called 'Tijuana Voices With Brass Sing Merry Christmas' and an Australian one named 'Jingle Bells Tijuana Style': 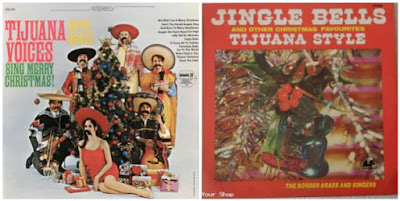 It was released on Chevron Records, a UK budget label exclusively licensed to the Woolworth's chain.  There was no Loius Gomez of course; the arranger was one Pete Winslow, who also played trumpet, and he's accompanied here by session musicians on Hammond organ, marimba, twangy guitar and jazzy percussion.

Although the sleeve notes claim "Louis Gomez and his Mexican Brass play some of those songs that will always be associated with Christmas", there are quite a lot you wouldn't, including ones called Snowbird, Post Horn Rock, Londonderry Air a.k.a. 'Danny Boy', and There Is A Tavern In The Town which you'd most likely recognise as 'Head, Shoulders, Knees and Toes'.

Some are perky and some mellow, but they're all groovesome and the jazziest of the Tijuana cohort, especially their arrangement of the perennial Winter Wonderland.  If you see it hanging around in a charity shop try not to let the cover put you off buying it, as it's a really fun, swingin' record.

Not quite as swingin' is the album by the genre's originator, Christmas With Herb Alpert & The Tijuana Brass, sent to me last December by dear pal and fellow car boot botherer Beany.

This 1971 reissue of what was originally titled "Christmas Album" is on the Mayfair imprint, a budget series belonging to Herb's own label A&M.  It was distributed by Pye, and when held up to strong light the otherwise black-looking vinyl disc becomes red and translucent, like much of Pye's output in the 1970s.

The voice and string arrangements on this mixture of mostly secular standards are by Shorty Rogers, with brass arrangements by Alpert, and include Winter Wonderland, Sleigh Ride and Jingle Bells, along with Herb giving voice to The Bell That Couldn't Jingle and Christmas Song.  More unusual are Las Mañanitas (a traditional Mexican birthday song that translates as "The Little Mornings"), Bach's Jesu, Joy of Man's Desire, and the rather odd choice of My Favourite Things from The Sound Of Music.

It's a pleasant enough record but a little too... well... tasteful for my tastes; far more restrained and even muted in comparison to his usual Tijuana Brass albums, and often not even very Christmassy.  But it still reached no.1 on the US album chart every year between 1968 and 1970, so it clearly hit the spot for many.

I'll be back tomorrow (Tuesday the 20th of December) with more festive car bootery, but until then you can listen to me introducing and playing over an hour of all-vinyl Christmas tunes on Car Boot Christmas 2016.   It's totally family-friendly, and you can use the player below or click the link to go directly to Mixcloud.