Former Yardbird Jeff Beck released his seventh album (and first under just his own name), Blow By Blow, in 1975.  I picked up a copy at a car boot sale just before Christmas for £3:﻿﻿

His first instrumental release, it's an energetic jazz fusion album featuring contributions from Stevie Wonder and long-time collaborator Max Middleton, as well as a reworking of Lennon and McCartney's "She's A Woman".  Wonder plays clavinet on his song "Thelonius" and George Martin produced the album as a whole.

Top tracks (Spotify):  Jeff Beck – You Know What I Mean

Blow By Blow reached no.4 on the US Billboard album chart.

This album was among the last of the car boot vinyl I picked up in 2011, on a very chilly Sunday a week before Christmas.  The boot sales I went to during the autumn and winter threw up a pretty good selection of vinyl and I'm looking forward to getting back out there in the spring and trawling through some more boxes of dusty old records!  Here's a selection from the last few months: 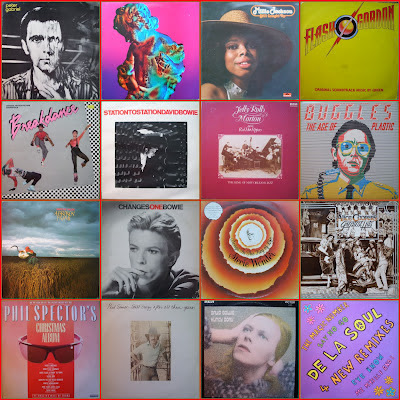 Roll on springtime!
Posted by minibreakfast at Wednesday, February 22, 2012