I got this last summer at a boot sale for 50p: 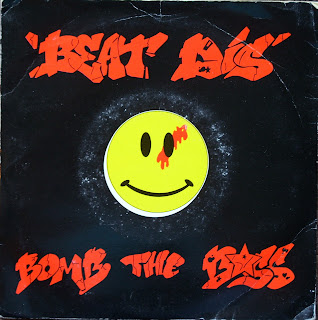 This was the debut single from Tim Simenon a.k.a. Bomb The Bass.  Said to contain a whopping 72 samples, it was one of the first tracks to herald DJ and sampling culture going overground and enjoying chart success.

It reached no.2 in the UK and can be found on the 1988 album Into The Dragon, which peaked at no.8 in the album chart.  I was 13 at the time and my big sister had the album on cassette, which I used to borrow.  I recently bought myself a cassette copy via eBay for 99p and the Proustian rush was enormous!

Here's the single on my Dad's old record player: